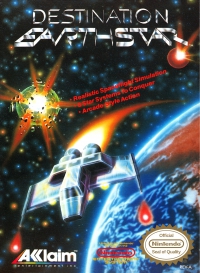 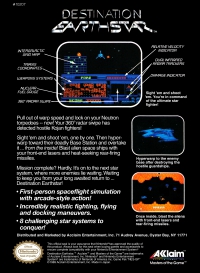 The view of the game is from the cockpit of a spacecraft. The goal of the game is to explore a grid which is displayed on screen in search of opponents to destroy and to land on planets some of which refuel the energy and refill ammo to the player's arsenal of weapons which consist of his photon laser. This is his primary weapon while the torpedoes become his second weapon. After the player has destroyed every enemy that is on the grid, a number will be indicated. This number represents how many enemies are in that quadrant of the grid. After blasting numerous enemies, the player will finally be able to go to the planet labeled "B" on the grid. These planets are unlike the other planets as they do not refill the player's vehicles energy or ammo. Rather, they are an enemy base that proceeds with the player entering a 8-bit cutscene of his space craft entering the base's gravitational orbit with the game play changing from a first person cockpit you had on the grid stage to a horizntal 2D shmup stage similar to Konami's Gradius or R-Type. Using this perspective, the player can fire projectiles from the front or back of his ship.

Centuries ago your ancestors were kidnapped off of their spaceship by an alien race known as the Kojans, taken to their alien world and displayed as exhibits in the Kojans' interstellar zoo. In the eons that have passed, the Earthlings have been granted freedom by their now more civil abductors. The EarthStar society has nominated you to fly SpaceShip EarthShip back to the planet of your ancestors.

Your path home will not be an easy one, however. Terrestrial Terrorists inhabit the eight systems between you and Earth. In your ship, it's all up to you to not only make it to Earth, but also destroy the terrorists in your way.

The first part of each of the eight stages involves your flight through the vast systems. You'll have a map used to locate and attack enemy ships. Also, you'll have to refuel at mother space stations, repair any ship damage you may incur, and land on planets that may offer you special weapons and other surprises.

The second part of each stage involves actual infiltration of terrorist bases. The first person, through-the-window view of the stage's first part switches to side scrolling as you blast away at anything coming at you. Each stage ends with a boss ship that will put your dogfighting abilities to the test.

After defeating all eight stages, you'll finally have made it back to Earth. And you're definitely not the only one who wants to know what it's actually like.

DESTI O N
INTERGALACTIC
GRID Map
TRIAXIS
COORDINATES
WEAPONS SYSTEMS
NUCLEAR
FUEL GAUGE
3600 RADAR SWIPE
Pull out of warp speed and lock on your Neutron
torpedoes -- now! Your 3600 radar swipe has
detected hostile Kojan fighters!
Sight lem and shoot lem, one by one. Then hyper-
warp toward their deadly Base Station and overtake
it ... from the inside! Blast alien space ships with
your front-end lasers and heat-seeking rear-firing
missiles.
Mission complete? Hardly. Its on to the next star
system, where more enemies lie waiting. Waiting
to keep you from your long awaited return to ...
Destination Earthstar!
â€¢ First-person spaceflight simulation
with arcade-style action!
â€¢ Incredibly realistic fighting, flying
and docking maneuvers.
â€¢ 8 challenging star systems to
conquer!
RELATIVE VELOCITY
INDICATOR
DUAL INFRARED
RADAR TRACKERS
DAMAGE INDICATOR
Sight 'em and shoot
'em. You're in command
of the ultimate star
fighter!
Hyperwarp to the enemy
base after destroying the
hostile guardships.
9000
Once inside, blast the aliens
with front-end lasers and
rear-firing missiles.
Distributed and Marketed by Acclaim Entertainment, Inc. 71 Audrey Avenue, Oyster Bay, NY 11771
Official
NinTendO'
Seal of Quality
This official seal is your assurance that Nintendo@has approved the quality of
this product. Always look for this seal when buying games and accessories to
ensure complete compatibility with your Nintendo Entertainment SystemP
Destination Earthstar,TM AcclaimTM and Masters of the GameTM are trademarks
of Acclaim Entertainment, Inc. Nintendo@ and Nintendo Entertainment
Systems are trademarks of Nintendo of America Inc. Game Pak "NES-GP"
01989 Acclaim Entertainment, Inc. Made in Japan.
a I n men'
Masters of the Gamer"