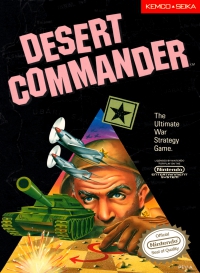 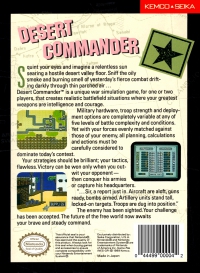 The player's force consists of nine different types of units and one headquarters unit (which is a unit by itself and also can be used to attack). Each scenario gives a different set number of units to use, which the player can mix and match between the different typese without going over that limit. When in a one-player game, the second controller can be used to modify the CPU forces. When playing against the CPU, the computer will be given a different ratio of units to command than the player. On the easiest scenario both the player and the CPU have the same amount of units, on all others the CPU will have more than the player. There is no variance in artificial intelligence, so the only thing that makes the later maps harder is the larger number of units the CPU has. The game is turn-based with no time limit. The object of the game is to destroy the enemy's headquarters unit. The player that does so first wins. Units have different mobility range, which varies according to the unit type and (except for aircraft) the terrain. They also have different shooting range, though this is fixed and not depends of the terrain. All unit types have limited ammunition and fuel. In order to replenish them the player must land them at the appropiate buildings; for example, all aircraft must stop at an airport in order to recharge their fuel and ammo supply. A certain unit is particularly strong or weak against a particular opponent, performing average against every other unit types.

DESERT COMMANDER NES NINTENDO GAME FACTORY SEALED NEW. Never opened! Still sealed in original shrink wrap from Nintendo. It does have a spot of shrink wrap that is missing from the front of the shrink wrap as you can see in picture #2. Unfortunately I have dealt with a several number of NES collectors over the past few months that are completely crazy. While most have been a pleasure and have been sane and normal a few have been complete nutjobs.

-N
quint your eyes and imagine a relentless sun
searing a hostile desert valley floor. Sniff the oily
smoke and burning smell of yesterday's fierce combat drift-
ing darkly through thin parched air...
Desert CommanderTM is a unique war simulation game, for one or two
players, that creates realistic battlefield situations where your greatest
weapons are intelligence and courage.
Military hardware, troop strength and deploy-
ment options are completely variable at any of
five levels of battle complexity and conditions.
Yet with your forces evenly matched against
those of your enemy, all planning, calculations
and actions be
carefully considered to
dominate today's contest.
Your strategies should be brilliant; your tactics,
flawless. Victory can be won only when you out-
wit your opponentâ€”
then conquer his armies
or capture his headquarters.
... Sir, a report just in. Aircraft are aloft, guns
ready, bombs armed. Artillery units stand tall,
locked-on targets. Troops are dug into position."
The enemy has been sighted. Your challenge
has been accepted. The future of the free world now awaits
your brave and steady command.
KEMCO SEIKA
2
Exclusively distributed by:
Seika Corporation, U.S.A.
Nintendo@ and Nintendo
Entertainment System@are
trademarks of Nintendo
of America Inc. Game-Pak
(NES-GP) @ 1989 Kernco.
Made in Japan
Official
Nintendo
Seal of Quality
This official seal is your
assurance that Nintendo@
has approved the quality of
this product. Always look for
this seal when buying games
and accessories to ensure
complete compatibility with
your Nintendo Entertainment
System@.