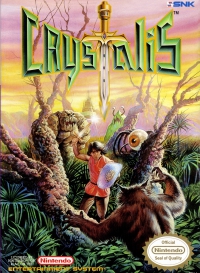 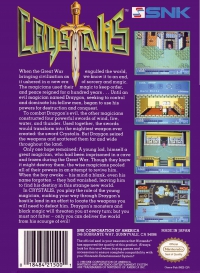 Crystalis takes place in a post-apocalyptic world, one hundred years after a global thermonuclear war has reverted civilization to a primitive, medieval existence populated with fierce mutated creatures. Science and advanced technology have been abandoned, though the old ways of magic have survived. The survivors of the terrible destruction built a floating "Tower" to prevent any future cataclysms, as its occupants would have the power to govern the world due to the Tower's weapons systems. A man known as Emperor Draygon, however, has revived the forbidden ways of science and combined them with magic. With these skills, he controls the world's last remaining military power and seeks to conquer what's left of the planet by attempting to enter the Tower

Fantasy and science-fiction come together in Crystalis, one of the top RPG games ever released by Nintendo. Youâ€™ll experience a post-apocalyptic world like no other when you dive into this exciting adventure. Battle against more than 70 enemies and interact with 300 characters as you collect the four elemental swords needed to create Crystalis. If you fail, Dragonia might take over the world so every move and interaction counts. This game creates an immersive RPG experience that was unheard of when it was released in 1990, but is still just as entertaining in the modern world of gaming. If you love RPG games, Crystalis for Nintendo is an essential addition to your collection.

When the Great War
bringing civilization as
it ushered in a new era
engulfed the world,
we know it to an end,
of sorcery and magic.
Ã¸Ã¸Ã¸sÃ¸
IITIP
r-auii
Boots
The magicians used their magic to keep order,
and peace reigned for a hundred years ... Until an
evil magician named Draygon, seeking to control
and dominate his fellow men, began to use his
powers for destruction and conquest.
To combat Draygon's evil, the other magicians
constructed four powerful swords of wind, fire,
water, and thunder. Used together, the swords
would transform into the mightiest weapon ever
created: the sword Crystalis. But Draygon seized
the weapons and scattered them far and wide
throughout the land.
Only one hope remained: A young lad, himself a
great magician, who had been imprisoned in a cave
and frozen during the Great War. Though they knew
it might destroy them, the wise magicians pooled
all of their powers in an attempt to revive him.
When the boy awoke â€” his mind a blank, even his
name forgotten â€” they had vanished, leaving him
to find his destiny in this strange new world.
In CRYSTALIS, you play the role of the young
magician, making your way through Draygon's
hostile land in an effort to locate the weapons you
will need to defeat him. Draygon's monsters and
black magic will threaten you at every turn; but you
must not falter â€” only you can deliver the world
from his scourge of evil!
18484 21500
SNK CORPORATION OF AMERICA
MADE IN JAPAN
246 SOBRANTE WAY, SUNNYVALE, CA 94086
The official seal is your assurance that Nintendo*
has approved the quality of this product. Always
look for this seal when buying games and
accessories to ensure complete compatibility with
your Nintendo Entertainment System
1990 SNK CORPORATION OF AMERICA.
NINTENDO AND NINTENDO ENTERTAINMENT SYSTEM
ARE TRADEMARKS OF NINTENDO OF AMERICA INC.
4
Official
Nintendo
Seal of Quality
.a
Game Pak (NES-GP)