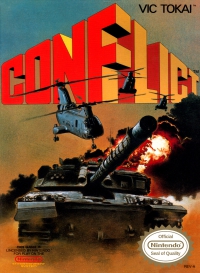 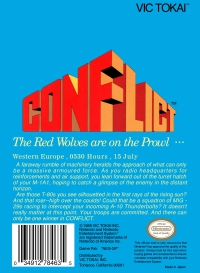 Conflict is a hex-based NES war game where the player is a three-star general who must accompany his troops to the ultimate victory. The player can earn or lose victory points by occupying cities and destroying units of the opponent's army. The player controls the Western Bloc while the computer (or second player) controls Eastern Bloc troops. A sequel was released for the Super NES entitled Super Conflict.

The Japanese version of Hagane: The Final Conflict for SNES is a side-scrolling action game. In this Sci-Fi-themed game, you play as Hagane. This advanced cyber ninja is on a quest to take revenge on the Koma faction for their wrongdoings. With special abilities, you must battle different enemies in different levels. The game does not have a save feature, and there are plenty of action scenes that keep the game moving along. The Fuma and Koma ninja clans look different, making them easy to differentiate during game play. This game is known for its non-stop action play.

VIC TOKAF
The Red Wolves are on the Prowl
Western Europe , 0530 Hours , 15 July
A faraway rumble of machinery heralds the approach of what can only
be a massive armoured force. As you radio headquarters for
reinforcements and air support, you lean forward out of the turret hatch
of your M-IA 1, hoping to catch a glimpse of the enemy in the distant
horizon.
Are those T-80s you see silhouetted in the first rays of the rising sun?
And that roar--high over the coulds! Could that be a squadron of MIG -
29s racing to intercept your incoming A-IO Thunderbolts? It doesn't
really matter at this point. Your troops are committed. And there can
only be one winner in CONFLICT.
Official
Nintendo'
Seal of Quality
This official seal is your assurance that
Nintendo@has approved the quality of this
product. Always look for this seal when
buying games and accessories to ensure
complete compatibility with your Nintendo
Entertainment System.
Made in Japan
0
34912 78463
01989 VIC TOKAI INC.
Nintendo and Nintendo
Entertainment System
are registered trademarks of
Nintendo of America Inc.
Game Pak "NES-GP"
Distributed by
ViC TOKAI, INC.
5
Torrance, California 90501