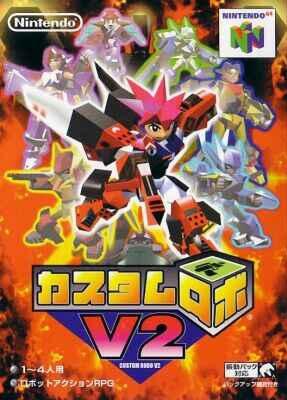 Custom Robo V2 (ã‚«ã‚¹ã‚¿ãƒ ãƒ­ãƒœVï¼’, Kasutamu Robo BuitsÅ«) is a Sci-Fi action role playing game developed by Noise and published by Nintendo. It was released for the Nintendo 64 in Japan on November 10, 2000. Later, on February 19, 2008, it was released for the Virtual Console in Japan, but it is unknown if it will be released in any region outside Japan for the Virtual Console. It is the second title of the Custom Robo series, as well as the last of the series for the Nintendo 64. It is also the first title of the series to allow up to four players to play, instead of two players.

Sequel to the Japan-only N64 mech battle game. Graphically and gameplay-wise Custom Robo V2 is the splitting image of its predecessor. Whereas the first game had only one quest, players get to choose from two scenarios this time around. Both storylines are set exactly a year after the first Great Robo Cup. Technological enhancements have brought forth new Robos, new weapons and parts -- but also new, more advanced rivals. Players once again slip into the role of a young boy who wants to prove to the world that he is the best Custom Robo fighter in existence. The ultimate goal is to improve your skills so that you can defeat the champion Custom Robo builder of them all.