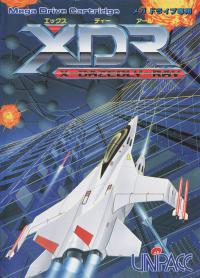 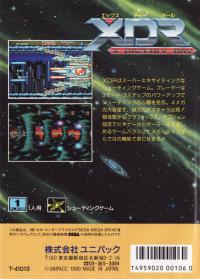 XDR (ã‚¨ãƒƒã‚¯ã‚¹ãƒ»ãƒ‡ã‚£ãƒ¼ãƒ»ã‚¢ãƒ¼ãƒ«), short for "X-Dazedly-Ray", is a 1990 shoot-'em-up by UNIPACC released for the Sega Mega Drive exclusively in Japan. The warlord Guardia was banished from the planet Sephiroth, otherwise known to be a very peaceful planet. Many years later, he returns, complete with an entire army which overpowers the Guardian army, leaving one hope: the newly developed XDR craft. A shoots. Rapidfire is an option "AUTO" under the "CONTROL" option in the Options menu. C changes speed; the current speed is shown in the HUD. Powerups are collected as in other schmups, except that missiles can also be collected, in limited quantities, and fired with B.