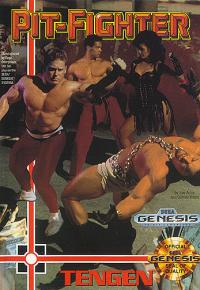 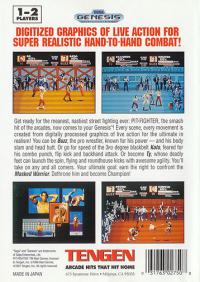 The player begins Pit-Fighter by choosing one of the three playable characters, who all have different moves, speed, and power. As many as three people can play at a time, but there will be extra opponents to fight during any of this game's 15 different matches. Every third fight is known as a Grudge Match. In a Grudge Match, the player must fight against a CPU controlled clone of his or her fighter (if playing alone) or the other players in a multiplayer game. Each player has three "knockdowns" - getting knocked down three times eliminates them from the Grudge Match, the winner is the last man standing. This match plays more like a bonus round, in that there is only results are gaining or failing to gain bonus money, and losing the Grudge Match does not eliminate a player. The final battle, the "Championship Match", is between the player and the mysterious entity that taunts between matches every once in a while, the Masked Warrior. If more than one person is playing the game before this match, they must fight each other to the death until only one becomes victorious and can fight him. Buzz posing after taking down the Executioner. The player must jump, punch, and kick their opponent until his/her energy runs out. If the player presses all three of the buttons at a time, the character will perform a "super move". Sometimes during matches the player will come across foreign objects such as knives, crates, sticks, motorcycles, and bar stools that can be thrown at you or your opponent. The player may also come across a power-up known as the "power pill". If the player or the opponent grab this item, one will become temporarily stronger and take less damage from hits. Sometimes even the crowd will interfere in the fights. Two characters, known as Knife Man and Knife Woman, will come out of the crowd and stab the player with their daggers. The player can take these nuisances out with one hit. Sometimes there is also a fat bearded man with a stick. If the player knocks him down, the player can take the stick and use it against the current opponent. The audience will also push any fighter that ends up among them, and stays there more than a few seconds. They will be forced back into the fighting area.

Pit-Fighter is a no-rules, unregulated fighting game which lets you control one of three digitized fighters: Buzz, a body builder and former pro wrestler; Ty, a kick-boxing Pit-Fighter veteran; and Kato, a speedy, very agile Karate expert. Each character has three super moves. In addition to fighting with fists and feet, weapons such as sticks, knives, crates, and garbage cans are available throughout the game. As you progress through the levels, you'll eventually face ten different fighters, each of them with unique abilities and fighting techniques. The fights take place in seven different areas: a warehouse, a garage, a subway station, a high-rise building, a bar, a freeway overpass, and a wharf. Like most fighting games, the one-player game is a series of one-on-one fights. The two-player simultaneous mode, however, differs from the norm in that instead of fighting each other, you and your gaming partner fight two of the bad guys. As the fights play out, a crowd of anxious spectators cheer. If you get too close to the audience, you get shoved back into the middle of the action.