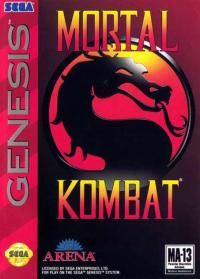 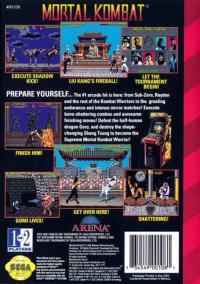 In Mortal Kombat, the player receives information concerning the backstories of the characters and their relationships with one another mainly in biographies that are displayed when the start button is not pressed, during attract mode in the title screen. These bios featured short videos of the characters taking their fighting stances and text informing the motives for each character to enter the tournament. The game takes place in a fantasy setting, with most of the game's events occurring on the fictional realms of the Mortal Kombat series. The original game is notably the only title in the series that features only one realm, that being Earthrealm. The tournament featured in the story actually takes place fully at Shang Tsung's Island, located somewhere on Earth, with seven of its locations serving as Kombat Zones.

One of the most controversial video games ever released, Mortal Kombat is a 2D fighter in the mold of Street Fighter II: Champion Edition, but is much more graphically violent. The game features "Fatality Moves," which lets a victorious fighter gloat over a dazed opponent by performing a gruesomely primal act, such as ripping out the heart or spinal cord. The tournament, as hosted by evil wizard Shang Tsung, consists of seven digitized fighters engaging in a series of one-on-one fights. The winner must battle Shang's inhuman champion Goro, and then the wizard himself. A five-button control system allows for blocking and a variety of high and low punches and kicks. In addition, each fighter is equipped with a number of special moves, such as fireballs or shadow kicks.

The Genesis version includes support for both three- and six-button controllers. While the arcade game's gore has been turned off by default (blood is green instead of red), it can be activated through a code entered on the title screen.