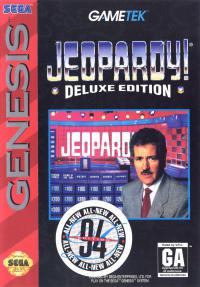 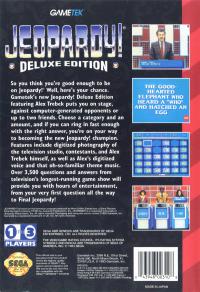 Jeopardy! Deluxe Edition is an updated version of it's Jeopardy! predecessor which features over 3,500 different new questions along with the standard features of Jeopardy such as Daily Doubles, a digitized likeness of the host, Alex Trebek and even the theme music. Like it's previous version, the player uses the buttons to buzz in and using the d-pad to highlight letters and spelling out their answers. The player can also play against two friends or play against the computer A.I. instead.

This...is...Jeopardy! Now you can participate in the only TV game show that has contestants supplying the questions. Up to three players can test their knowledge from a pool of over 3,500 answers in 700 different categories. Choose from five likenesses (three male and two female), type in your name, then get ready to buzz in using the control pad. A cursor will allow you to enter the letters of your response, but don't take too long - you only have one minute to type in the question.

All of the rounds from the show are here, including Double Jeopardy, Final Jeopardy and the Daily Double. The Deluxe Version also features the digitized voice and image of Alex Trebek, not to mention photography straight from the television program. The famous theme music has found its way onto the cartridge as well, and fans will instantly recognize the authentic sound effects.