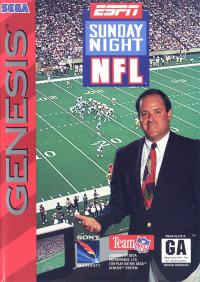 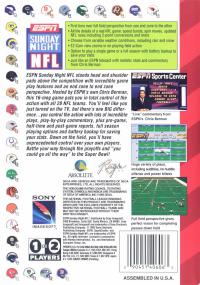 ESPN Sunday Night NFL was one of the many football games released back in the day. It features all 28 official NFL teams and their respective logos, but doesn't feature a license from the NFLPA, so there are no actual players names in the game. There are four different game modes to choose from: Playoffs, Single Game, Season and another season mode that lets the player act out the 1994 NFL season schedule. It also had variable weather conditions that the players on the field would react to and a battery back-up to save games. It also featured Chris Berman, who not only graced the front cover but also gives commentary as well.

The 16-Meg ESPN Sunday Night NFL brings together all 28 NFL teams from the 1993 season, full season play with battery backup to save statistics, variable weather conditions (dry, rain or snow), and a vertical field perspective that lets you see far down the stadium without the need for passing windows. Once the ball is caught, the camera will zoom-in on the receiver or running back as you make your way to the endzone. Chris Berman is in the studio and will introduce each team and offer some his famous slogans during play.

Other notable features include: audibles; no-huddle offense; adjustable quarters (5, 10 or 15 minutes); plays that can be flipped; penalties; three different kicks (deep, onside and squib); a coach mode that involves just calling plays; and two-point conversions. The four game modes in ESPN Sunday Night NFL consist of a Single Game, 1994 Season, Random Season and Playoffs. Since the game does not include an NFLPA license, players are identified by position instead of name.