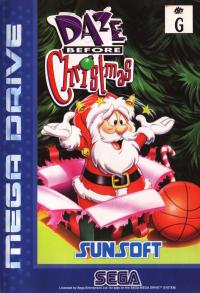 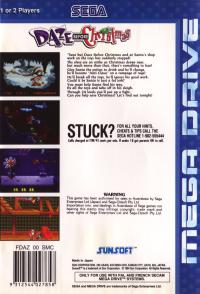 Daze Before Christmas is a Christmas-themed platformer developed by Funcom and published by Sunsoft for the Sega Mega Drive in 1994 and later for the SNES. You play as Santa Claus, tasked with saving all of his elves and retrieving his plans from the evil Timekeeper. Daze Before Christmas is notable for being the only Mega Drive game on record to be released exclusively in Australia. According to interviews with with Funcom programmer Carl-Henrik Skarstedt and Sunsoft developer David Siller, manufacturing was actually cancelled shortly after the first run had shipped due to quality issues.

'Twas but days before Christmas, and at Santa's shop, work on the toys has suddenly stopped! The elves are on strike as Christmas draws near, but much worse than that, there's something to fear! Give Santa the potion to drink and he'll change; he'll become "Anti Claus" on a rampage of rage! He'll break all the toys, he'll ignore his good work. Could it be Santa is just a big fat jerk?

You must help Santa find his way, fix all the toys and take off in his sleigh. Through 24 levels you'll put up a fight. Can you save Christmas? Let's find out tonight!