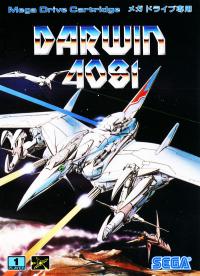 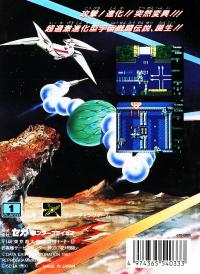 Super Real Darwin is a 1987 arcade shoot-'em-up by Data East. Sega ported it to the Sega Mega Drive and released it in 1990 exclusively in Japan under the name Darwin 4081 (ãƒ€ãƒ¼ã‚¦ã‚£ãƒ³ï¼”ï¼ï¼˜ï¼‘). The game controls like a regular shoot-'em-up: A and C shoot bullets, B drops bombs; there is rapidfire. However, unlike regular shoot-'em-ups where weapons are upgraded through powerups, your ship "evolves" to survive situations and get past obstacles. Evolution occurs with the Evol (small faces with an E on them) and B-Evol (darker Evols). Each pickup adds a new evolution state to the list. After a particular amount of time, one evolution wears off and the next evolution is chosen. The DNA powerup does provide a more permanent weapon upgrade, but will merely just make the existing weapons stronger. You can hold up to nine DNA powerups.