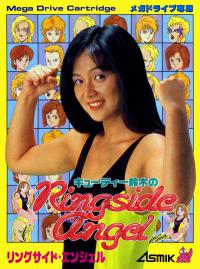 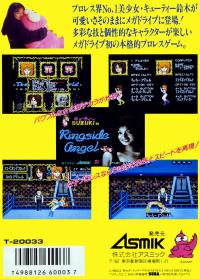 Cutie Suzuki no Ringside Angel (ã‚­ãƒ¥ãƒ¼ãƒ†ã‚£ãƒ¼éˆ´æœ¨ã® ãƒªãƒ³ã‚°ã‚µã‚¤ãƒ‰ã‚¨ãƒ³ã‚¸ã‚§ãƒ«) or Cuty Suzuki no Ringside Angel is a wrestling game developed by Copya System and published exclusively in Japan in 1990 by Asmik. In the game, you play as one of nine female Japanese pro wrestlers fighting to the top of the league. There are four modes: one-player tournament, two-player tournament, two-player match, or watch the computers play with the characters/field of your choice. There are five fields (New Face, Straw Berry, White Snow, Star Light, and Grand Champion). Each field is one half of a normal wrestling ring that the competitors can move around a la Golden Axe