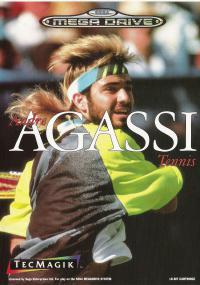 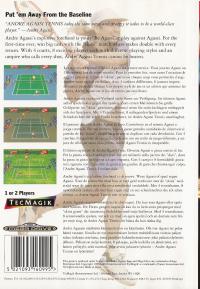 A game endorsed by the American player who stunned the tennis world in the early 90s with his "Image is everything" looks, sporting long hair, earrings and colorful shirts, Andre Agassi Tennis includes eight players (male and female and as as expected, only Agassi is a real player) rated according to movement speed and both accuracy and strength on serve, backhand and forehand. Gameplay features all the usual moves: smashes, passing shots, volleys and all kinds of backhand and forehand plays, but unlike other games, precise positioning and timing are crucial to avoid hitting the ball outside the court, swinging the racket into thin air or more embarrassing, let the ball hit you on the head. Three courts are available: Grass, Clay and Indoor (Sega versions add a fourth, Hard), but the differences between them are minimal. Game modes change according to the version, with the 16-bit versions including a "Skins" game, where each point is worth a sum of money based on the number of times the ball was hit.

Andre Agassi Tennis lets you play as or against the professional on grass, clay, hard court, or the American indoor court. Compete against a friend or challenge up to seven computer players, each having different strengths and weaknesses. Three game modes await you, including a Practice session against a ball machine, Tournament, and Skins Tournament, where you can earn money based on the success of your shots.

Tennis moves, such as forehands, lunges, lobs, slices, and backhands are featured in the game, as is the ability to put spin on the ball. An announcer will let you know if the serve was in or out and will keep you updated on the score as you try to beat your friend or advance through the computer competition. Andre Agassi Tennis also features a password save feature so you can resume Tournament progress after the console is turned off. Now's your chance to see if you can go toe-to-toe with a Wimbledon champion!