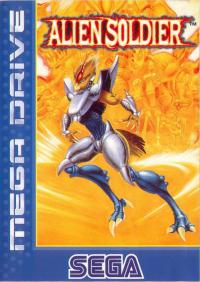 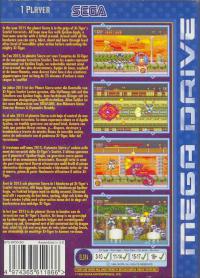 Alien Soldier is a side-scrolling action game in which the player takes the role of Epsilon-Eagle, the former leader of the Scarlet mutant group. The mutants are now lead by the evil Xi-Tiger who had turned them to terrorism, and one of their goals is to kill Epsilon-Eagle... At the start of the game the player chooses four out of six weapons - each with special advantages or disadvantages against certain enemies. As mutant Epsilon-Eagle also has other special powers, e.g. teleporting across the screen or (with full health) morphing into a powerful phoenix destroying everything in his way.

As Epsilon-Eagle, you are an alien soldier who has been genetically engineered to produce maximum intelligence and strength. You were once a member of the criminal organization Scarlet, but when you decided to break from the group, you were forced into a showdown with Scarlet’s new leader Xi-Tiger, who kills a hostage in his attempt to destroy you. Now it’s up to you to take revenge against the bad guys in this side-scrolling action game! Choose from six different weapons and battle the bosses of Scarlet until you reach the final confrontation with the ultimate secret weapon!