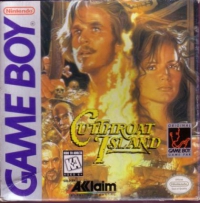 Based on the feature film of the same name. The game casts players in the role of renegade treasure hunters. The player is able to choose between two characters: Morgan Adams, a female character who wields a rapier; or William Shaw, a buccaneer who is armed with a sword. The game features single player and two player action mode. During single player mode, the player's character must battle through 10 levels, encountering various foes such as pirates, redcoats and harbor masters. The game features two different gameplay styles to choose from: Swordplay and Brawling. In addition to all the swordplay, level two requires players to flee from prison guards in a quarry cart, and level five puts player atop a runaway horse-drawn carriage. As the player progresses through the game several items such as knives, bombs, bottles, torches, hammers, pistols, and other weapons are collectable.

Based on the feature film of the same name, CUTTHROAT ISLAND casts you in the role of a renegade treasure hunter. You can play as either Morgan Adams, the beautiful but deadly pirate who uses a rapier as well as any man; or William Shaw, a feared buccaneer who is armed with a sword and isn't afraid to use it. You've got to battle your way through 10 levels of action, encountering pirates, redcoats, harbormasters, and a roster of other dastardly foes that will stop at nothing to put you out of commission permanently. There are two different gameplay styles to choose from: Swordplay, which offers standard sword-fighting action; or Brawling, which adopts a more traditional fighting-game style. So slip a bandana on your head, find that eye-patch, and get ready for swashbuckling action like you've never seen.

Based on the movie CUTTHROAT ISLAND; 10 levels of sword-fighting action; two different styles of gameplay; all kinds of treasure to discover and enemies to vanquish