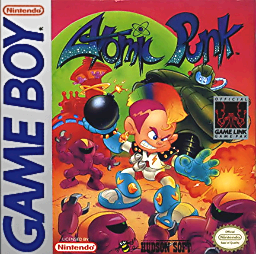 Atomic Punk, released in Japan as Bomber Boy (ãƒœãƒ³ãƒãƒ¼ãƒœãƒ¼ã‚¤, BonbÄ BÅi) and in Europe as Dynablaster, is a video game released for the Game Boy in 1990 by Hudson Soft and licensed by Nintendo, as part of the Bomberman series. It was the first game of the series to be released on the Game Boy.

There are four modes of gameplay in Atomic Punk, including two single player modes and two multiplayer game modes.

Irem also released the first Bomberman arcade game and its sequel under the Atomic Punk name.