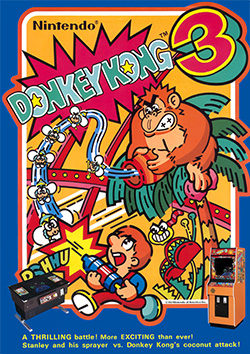 Donkey Kong 3 (ãƒ‰ãƒ³ã‚­ãƒ¼ã‚³ãƒ³ã‚°3, DonkÄ« Kongu SurÄ«) is the third video game in the original Donkey Kong series by Nintendo. It was released near simultaneously for the Family Computer and arcade, and later released in America on the Nintendo Entertainment System in 1986. The game was re-released on the Wii Virtual Console in North America on July 14, 2008 and in Europe on January 9, 2009. Although it is a sequel, this title is a radical departure in gameplay from previous titles. Donkey Kong 3 was also the first game to bear the current Donkey Kong logo (although the logo in the game was green instead of red).