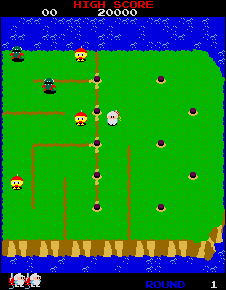 Dig Dug II (ãƒ‡ã‚£ã‚°ãƒ€ã‚°â…¡, Digu Dagu Tsu), subtitled Trouble in Paradise for Bandai's American NES port, is the arcade sequel to Dig Dug, released by Namco in 1985. It runs on Namco Super Pac-Man hardware but with a video system like that used in Mappy, The Tower of Druaga and Grobda (without the DAC).

A reimagined version for the PC titled Dig Dug Island, featuring online multiplayer and graphical style of Dig Dug Remix, was also released in 2008 exclusively in Japan. However, the game's servers were shutdown in just under a year, leaving it now unplayable.