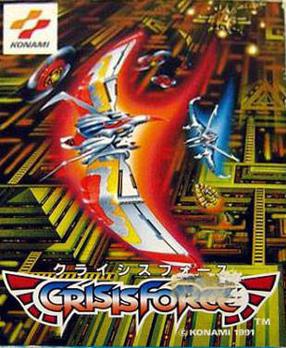 Crisis Force (ã‚¯ãƒ©ã‚¤ã‚·ã‚¹ãƒ•ã‚©ãƒ¼ã‚¹) is a vertical-scrolling shooting game released by Konami exclusively in Japan for the Family Computer on August 27, 1991. As Konami's final shooting game for the Famicom, the game was developed to push the hardware's specifications to its limits and utilized Konami's custom VRC4 chip (previously used for the Famicom version of Gradius II) to allow for four-way scrolling and large bosses. However, because of the game's late release during the Famicom's lifespan, a year after the launch of its successor the Super Famicom, Crisis Force did not achieve the popularity that Konami expected.

The player controls one of two fighter ships piloted by Asuka and Maya, a pair of twin siblings descended from the ancient civilizations of Mu, who must save the world from a breed of artificial monsters from the lost civilization of Atlantis. The main feature of the game system is the player's ability to transform its ship in one of three different forms, each with its unique attack method.