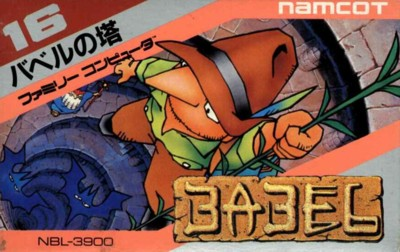 Tower of Babel (ãƒãƒ™ãƒ«ã®å¡”, Babel no TÅ), also known as Babel in the original version's box art and title screen, is a video game developed and published by Namco on August 18, 1986 only in Japan. It is a platformer/puzzle hybrid that was first released for the Family Computer and later for the Wii U Virtual Console. The regular version of the game contains 64 levels, and the "Babel Pro" version contains another 64 levels. Later, Nintendo adapted the title for play in the arcade as part of their Nintendo Vs. Series, calling it Vs. Tower of Babel. An enhanced version of it was later ported to the Sharp X68000. In 1997, the game was included on a compilation made for the Game Boy known as Namco Gallery Vol. 3. In 1998, the game was also included on a compilation made for the PlayStation known as Namco Anthology 1 where, like all of the Famicom games presented on the disc, an enhanced arrange mode was provided alongside the unaltered original game.