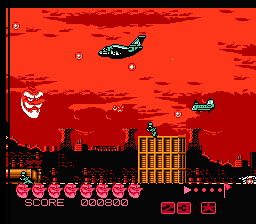 Samurai Zombie Nation, as the in-game title screen calls it, is a 1990 NES action game developed by KAZe and published by Meldac. It was first released in Japan in December 14, 1990 under the title Abarenbou Tengu (æš´ã‚Œã‚“åŠå¤©ç‹—, AbarenbÅ Tengu, lit. "Hooligan Tengu"), before being released later in the United States on January 1991. This game features a juxtaposition of zombies and samurai.

In Samurai Zombie Nation, the floating samurai head Namakubi goes to the United States to destroy Darc Seed â€” an alien who crashed to Earth via a meteorite in 1999, turned all the American people into zombies, and took control of various deadly weapons. Namakubi must recover the samurai sword Shura and destroy Darc Seed and its minions.