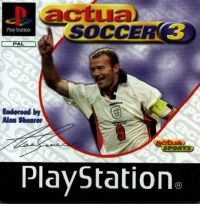 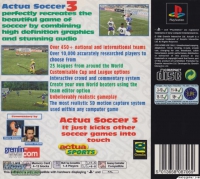 Actua Sports was a sports video game series published by Gremlin Interactive which competed with Electronic Arts EA Sports label during the second half of the 1990s, until Gremlin was acquired by Infogrames. The term "Actua" is a (seemingly marketing-related) play on Sega's line of "Virtua" titled games, which included Virtua Fighter, Virtua Racing and Virtua Striker.[1] The first game in the series was the 1995 milestone title, Actua Soccer, which quickly became one of the most important titles for the company. It was later joined by the rebirth of the Premier Manager franchise and the club version of Actua Soccer. In 1996, the first non-football game was released, Actua Golf, followed by the sequels Actua Soccer 2 in 1997, now endorsed by English international Alan Shearer and Premier Manager 98. The third installement in the Actua Soccer series and the Ninety-Nine edition of Premier Manager followed in 1998, the year a new title debuted in the series: Actua Ice Hockey, the official video game of the Nagano Olympic Games ice hockey tournament, followed by Actua Tennis in the same year. While the series died shortly after Gremlin was acquired by Infogrames, some of the games had further titles developed: UEFA Challenge, developed by the now Sheffield House, was published in 2002 and the rights of the Premier Manager franchise were acquired by Zoo Digital Publishing.

Actua Soccer
recreates the
beautiful game Of
soccer by combining
high graphics
and stunning audio
9
5 C13658 087069
Over 450+ national and international teams
over 10,000 accurately researched players to
choose from
25 leagues from around the world
customisable cup and League options
Interactive crowd and commentary system
create your own world beaters using the
team editor option
Unbelievably realistit gameplay
The most reali5tit 3D motion capture system
used within any computer game
Aceua Soccer 3
It just kiCkS other
soccer games â€¢neo
couch
and