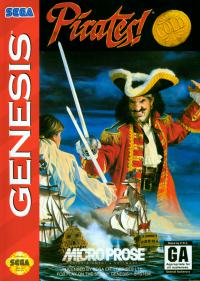 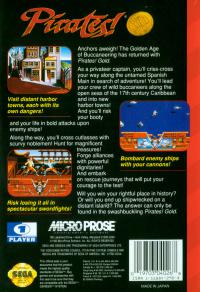 Pirates! is a single-player game. The player receives a letter of marque authorizing service as a privateer for Spain, the Dutch Republic, England, or France in the Caribbean. The player's loyalties may change over the course of the game; he may also hold rank with multiple countries and may turn to piracy at any time. Gameplay is open-ended; the player may choose to attack enemy ships or towns, hunt pirates, seek buried treasure, rescue long-lost family members, or even avoid violence altogether and seek to increase his wealth through trade. The game also has no predetermined end, although as time goes on, it becomes more difficult to recruit crew members. Also, as the player character ages, fighting becomes more difficult, and deteriorating health will eventually force the character into retirement. The game ends when the player retires, at which point he is given a position in his future life, from beggar to King's adviser, based on accumulated wealth, land, rank, marital status, and other accomplishments.

Sid Meier's classic computer game Pirates! can now be enjoyed on the Sega Genesis with revamped graphics and music in MicroProse's Pirates! Gold. The game offers you the chance to play the role of a pirate in six different game scenarios or careers, each beginning with a different time period in history.

Choose from the following: 1560s' The Silver Empire, 1600s' Merchants and Smugglers, 1620s' The New Colonists, 1640s' War for Profit, 1660s' The Buccaneer Heroes, or 1680s' The Pirates' Sunset. You can also select your nationality, difficulty level and one of five special abilities your character will possess, including fencing, navigation, gunnery, medicine, or wit and charm.

After typing in your family name, you'll have to first win a duel on board a ship before you can start sailing from an overhead view of the Spanish Main. You're then left to your own devices on how to play the game. Earn titles by fighting for kings of different nations, battle ports, attack and acquire bigger ships, hire crew members, sell goods or even search for buried treasure.

Besides starting a new career, you can assume command of one of six famous expeditions, practice sword fighting or view the Hall of Fame of top pirates. Up to four games can be saved to cartridge, so you can resume your buccaneering whenever you feel the urge to pillage and plunder. Just make sure you have enough rations to last your trip and gold to divide among your crew!